It's OK - we already have fibre on site 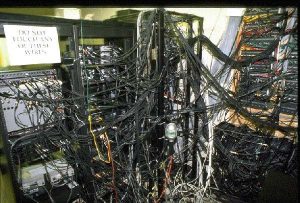 This is a tricky one: You’re looking at a new property for your business and you see a BT or Virgin branded box on the wall in the comms room, suggesting some sort of fibre is present already.

Once you move in, does that fibre become yours?

You certainly have possession of the hardware and any cables leading into it, the problem is, you can’t actually use them. If you call the supplier (BT, Virgin etc), they’ll need to quote you for a brand new setup, every time. Even if the fibre is only six months old and the previous Leasee of the line left it behind under dubious circumstances, the carrier is obliged to install a brand new circuit, probably right next to the old one.

The same goes for any wholesale partner of these companies (like us) who use BT, Virgin etc for the last mile fibre into your building; nobody can take over the fibre, there is no migration path.
At fear of repeating myself, it needs to be a brand new install, every time.

“But why?”, I hear you ask. Well, numerous valid reasons plus, maybe, possibly, some small element of pig-headedness on behalf of the wholesaler.

The strongest case I’ve heard for the defence concerns taking over potentially damaged, almost certainly shop-soiled goods. If you were leasing hardware for your company, would you be happy paying top dollar for a 3 year old piece of kit? Would the supplier be happy still trying to support said kit? Applying that to fibre lines, these suppliers work to incredibly stringent SLAs, guaranteeing end to end connectivity with the promise that they could potentially throw £1000s at fixing a problem if one occurred. With that in mind, it certainly makes sense to give themselves the best fighting chance by starting with a brand new, fully tested connection from day one.

Also, there can be contractual and legal reasons why a line can’t just be taken over.

Looking at that cad of a previous leasee, he may have fled the building six months in, but he might have 4 and a half years of his contract for the leased line remaining, meaning it can’t be leased out to another party in the interim (whether he’s still paying for it or not). It potentially becomes such a minefield that it does start to make more sense to just go for a brand new install from the start.

But it’s not all bad news…

The great advantage of fibre already present on site is that somebody, at some point, has already paid for the infrastructure to be put in place to deliver that line. The fibre strand that comes into your premises is only part of the story and, in many ways, just the tip of the iceberg of the whole service. Because, while deploying that single line, the Carrier will have dug on the main road, laid ducting to accomodate dozens of future fibres, and potentially installed a “spine cable”, a mass of fibre strands that they can simply pull another strand through into your premises.

If that is the case (and usually it is) a new fibre install shouldn’t generally raise any extra costs and the delivery category can be as fast as 30 working days, as so much groundwork (literally) has been done already.

So, it’s definitely good news if your building already has a fibre line installed, but it does need to be treated as a new install. Then again, wouldn’t you prefer a brand new line anyway, rater than picking up somebody else’s leftovers..?